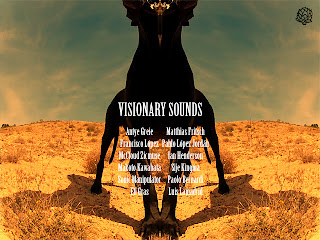 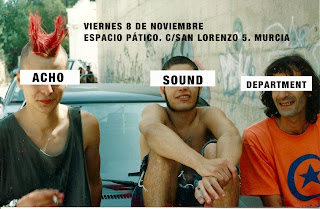 Visionary sounds has being asked to be part of sonm.

SONM ARCHIVE is a nonprofit online platform which aims to spread experimental music and sonic art, as well as promote the artists that work in these fields.
This collection of cultural interest is framed within the boundaries of research and service to culture. Therefore, in order to be able to listen, registration is needed.
http://sonmarchive.es/ 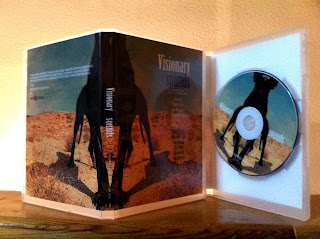 FESTIVAL INTERNACIONAL DE CINE DE MURCIA
Ibn Arabi was a Sufi mystic, philosopher, poet, traveller and wise Muslim from Andalucia born in 1165. His hunger for knowledge drove Ibn Arabi to a life of travel, first travelling around Al-Andalus and then to North Africa visiting different sufi groups. At a later stage he visited Cairo and Jerusalem. After experiencing two years of spiritual emotions in Mecca he decided to continue his journey to Bagdad, Mosul, Konya and Damascus, where he died in 1240. The importance of his work stems from his thoughts and ideas about both geographical and spiritual travel which he adopted as a result of his tireless journeys. In his writing we find the search for oneself and the search for beauty and love in daily life. His life and experience serves as a reference for tolerance and respect towards other cultures and beliefs. 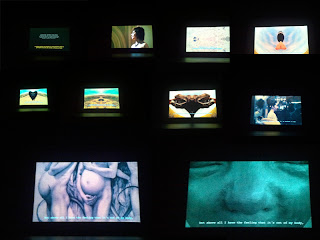 http://www.in-edit.beefeater.es/webapp/industria
Posted by a at 4:14 AM

AADK UNEXPECTED SUMMER 2012
THE FINAL NIGHT OF AADK UNEXPECTED WILL BE IN SEPTEMBER IN BERLIN. The venue and date will be announced very soon, but the line up will be the same. 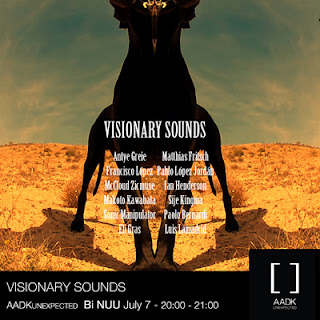 
Antye Greie, Germany:
AGF aka Antye Greie, born and raised in East Germany is a singer and digital songwriter, producer, performer, e-poet, calligrapher, digital media artist known for artistic exploration of digital technology through the deconstruction of language and communication.

Francisco López, Spain:
Francisco López is internationally recognized as one of the major figures of the sound art and experimental music scene. Over the past 30 years he has developed an astonishing sonic universe, absolutely personal and iconoclastic, based on a profound listening of the world. Destroying boundaries between industrial sounds and wilderness sound environments, shifting with passion from the limits of perception to the most dreadful abyss of sonic power, proposing a blind, profound and transcendental listening, freed from the imperatives of knowledge and open to sensory and spiritual expansion.


McCloud Zicmuse, USA. Hoquets, Belgium:
Intermedia artist who translates possibilities into reality. Working primarily with music, installations, graphic design, textiles, & film.Member of the band Hoquets, this Belgian/American/French trio mostly play with instruments that they invent and construct in their Brussels workshop, out of wooden boards, broken strings, tin cans, etc.  Their music is overflowing with energy and sounds like no other, inspired by indie pop, hip hop, punk, funk, sound art and the strangeness of their homeland, Belgium.

Sonic Manipulator, Australia-Mars:
Electronic musical performer and inventor.After taking a spin out from Mars one day, many years ago, a blown ion drive forced him down to earth as a custodian of mankind. Wearing his musical inventions like warped radios, instruments derived from turntable scratches and Theremins and some other instruments that seem to be sonic weapons; He would warn the world of an impending Martian attack by means of sonic manipulation.


Eli Gras. Spain:
A multidisciplinary artist, Eli is a self-starter who has worked in several creative fields, such as writing and design, aside from a long career in experimental and underground music.She has travelled a long path from experimental to electropop, via greek music, minimalism, folk, choral, funk and free electronics, although her musical practice centers focuses on experimental improvisation.


Matthias Fritsch, GERMANY
Matthias Fritsch lives and works in Berlin. He studied Media Art at the Staatliche Hochschule für Gestaltung Karlsruhe in Germany, and Film, Fine Art and Curating at Bard College, Center for Curatorial Studies and Art in Contemporary Culture, New York, USA. He has made several short and long films as well as media-based installations. In recent years Fritsch has focused on the digital communities formed within Internet video platforms and he has examined their importance in the formation of contemporary cultural production.
Pablo López Jordán, SPAIN
Audiovisual artist and film sound recordist. Pablo bases his work on the sound art, exploring the use of technology on sound production and audio field recording; through the creative improvisation, asynchrony and error. He bases his video-art works on nature and the human perception.Director of this documentary film based on artistic collaborations. Member of [AADk] Spain.
Ian Henderson. UK.
His artwork has slowly evolved to utilise video in a number of ways; in installations, through the development of stand-alone pieces of video and occasionally as a documentary record of other art endeavours. Most of his work dwells on some aspects of religion, human perception or the slowed-down sensations experienced in meditation.
The use of video has become a way of creating environments that encourage a slowing down - a move away from the usual overstimulation associated with urban existence. Natural phenomena, the landscape and various bodily or aural phenomena are used to create a meditative and reflective ambience.
Paolo Bernardi. ITALY.
Italian filmmaker based in Mallorca. He studied at Centro Sperimentale di Cinematografia in Milan and had an international education in Paris and Prague. His work always deals with narration, as methodology to organise reality. He usually works in commercial project where he learned how important and difficult is to communicate in 30 seconds. The most important challenge for him is to find new ways to do something which has always existed: telling a story. He also makes documentary movies about art and nature, always mixing up  information and storytelling in a very personal way.
Luis Lamadrid. SPAIN.
Madrid-based artist and works in Spain as a video maker and graphic designer. Part of the creative team Utray-Lamadrid. His videos cover a wide variety of genres: video-collage, video-poem, video-portrait, video-dance, video-documentary approached from a perspective of conceptual experimentation and musical composition. The error, technical limitations and the balanced random inspire the most of his works.Exhibitions at the international contemporary art fair of Madrid, ARCO89 (VideoArco89), Muestra de Arte Joven 1991, awarded the First Video Art Price of Madrid Capital of Culture, 1992. Studies in Kunstakademie Düsseldorf, 1989. Grant in the Schloss Solitude of Stuttgart, 1993. In 2011 his work has been shown in "B Sides of the History of Video Art in Spain" (travelling exhibit) and "The 8th Busan International Video Art Festival" (Seoul).
Sije Kingma. NETHERLANDS
During his studies at the academy of fine arts, Kingma begins experimenting with the narrative sides of videoart. Besides examining the technical possibilities of the new media, Kingma drowns himself in his own fantasies. Together with his classmate Fabian de Boer, Kingma produces some short experimental films. These are films where puppets or puppetlike figures have the main part in a harsh and violent world. In 2005 Kingma graduates with a bigger filmproject, Arsenicum. The puppets might be exchanged for real actors but the harsh fantasies of earlier works keep on being the main theme. At present Kingma uses different methods to produce his work. Rigid 2D animations are combined with edited graphics and self shot film material. Recurrent themes are: boy wonders, B-movies, paralel universes, games, comics, antagonists, propaganda and autocracy.
Posted by a at 8:58 AM